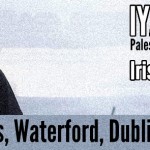 The Ireland-Palestine Solidarity Campaign is honoured to host a speaking tour with Iyad Burnat, a Palestinian human rights leader, from 1st to 8th October 2016.

Mr. Burnat will speak in the following venues:

Unfortunately, due to the British state refusing a visa to Iyad, he will only be able to travel in the south of Ireland, so we had to cancel the talks in the north and organise others at short notice.