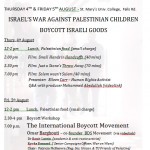 A workshop looking at how to take part in the Boycott Israeli Goods movement.

Omar Barghouti – co-founder of the BDS Movement  (via videolink)