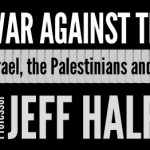 Between 19th and 21st January 2016, Professor Jeff Halper will be in Ireland to launch his new book, War against the People: Israel, the Palestinians and Global Pacification. The tour is hosted by the Ireland-Palestine Solidarity Campaign as part of the End The Irish Arms Trade With Israel campaign.

The launches will take place in the following cities:

—–
Prof. Halper provides an exhaustive survey of Israel’s weapons technology and population subjugation/control methods, for which the occupation of Palestine an Israeli live-testing facility, Halper says, thus allowing it to export high-tech weaponry that has been tested in ‘pacifying’ a population under occupation. Halper argues that this allows Israel to thrive in the global arms market, winning under-the-counter support from many governments that crtiticise it publicly, while buying and investing in its technology of repression.