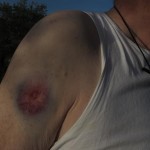 Earlier today, Good Friday, Irish cameraman Tommy Donnellen was shot in the arm by the Israeli military while filming a protest in the Palestinian village of Nabi Saleh in the occupied West Bank. Mr. Donnellan, who is from the Roscommon border, near Ballinasloe travelled to the West Bank last month. Today he sustained a wound from a rubber-coated steel bullet which punctured his upper right arm.

Speaking from Nabi Saleh, Tommy Donnellan said: “I was filming the protest when suddenly I was shot in the arm by a rubber-coated steel bullet, fired by an Israeli soldier from about forty feet away. I think I was deliberately targeted as a journalist as my video camera was plainly visible, and there was no stone throwing going on anywhere near me. After being hit I remonstrated with the soldier who fired on me. He then went back down on onto his knee adopting a firing position; luckily I was able to run to the cover of a nearby wall.”

Mr. Donnellan also said that: “It’s important to stress that while today I was hit, Palestinians are injured by these bullets almost every day. Many are also killed by these so-called non-lethal weapons, while the international community looks on and does absolutely nothing.”

Also in Nabi Saleh today, there were reports of many injuries due to tear gas inhalation and several other professional journalists were attacked with rubber bullets, concussion grenades and forced out of the area by the Israeli military. In East Jerusalem

Nabi Saleh is a Palestinian village with a population of 550 people, 20km north west of Ramallah in the Israeli-occupied West Bank.  In 1977 the illegal Israeli settlement of Halamish was established on private lands belonging to the villagers of Nabi Saleh and Deir Nidham. In 2009 the settlers took control of several wells belonging to the village, and since then Palestinians in the area have been subject to attack by Halanish’s extremist nationalist settlers. In December 2009 the villagers began to hold weekly peaceful protests against theft annexation of their land. These protests have been frequently attacked by the Israeli military, resulting in countless injuries and the death of one man – Mustafa Tamimi – who was shot in the head by a tear gas canister.

Israeli settlements in the West Bank are illegal under international law (Article 49 of the Fourth Geneva Convention and UN Resolutions 446, 452 and 465). Currently there are over 130 of these illegal settlements within the West Bank and East Jerusalem, with a growing population of over 450,000. Israeli settlers are subject to Israeli civilian law, while Palestinians living in the West Bank live under Israeli military law. These settlements effectively carve the region into a series of largely disconnected ‘bantustans’. A series of ‘settler-only’ roads and busses link the settlements to each other and to Israel. Palestinians are forbidden from using these roads and services.

Palestinians began a campaign of peaceful protest against the construction of the settlements and the separation wall in 2003. These protests have grown in number and support with people from all over the world travelling to take part in or report on them on a weekly basis.

IPSC Spokesperson Freda Hughes, who in the past has taken part in demonstrations in the West Bank, said: “What is happening in Palestine today is Apartheid. We call for a campaign of Boycott Divestment and Sanctions (BDS) against Israel until it complies with international law and universal principles of human rights. This is a peaceful tactic that can enable us to show the Israeli state that its actions have repercussions internationally and that it is no longer acceptable for it to act as it does. The construction of settlements must be stopped and the impunity with which Israel acts must be brought to an end.”