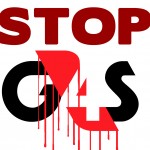 The Anglo-Danish security firm G4S is one of a number of private companies bidding for the JobPath contract with the Irish state. Amongst other things, G4S is notorious for its operations and service provision within the Israeli prison system.

IMPORTANT UPDATE: It was announced on Friday 6th June by G4S that it will pull out of the Israeli prison regime within three years. But as Randa Wahbe of Addameer Prisoner Support and Human Rights Association notes, ” this has no immediate effect on those facing human rights violations inside Israel’s prisons today [and] G4S has a long track record of saying one thing but doing another”.

Furthermore, following an international campaign by human rights activists, the Bill & Melinda Gates Foundation announced on Sunday that their organisation “no longer holds an investment in G4S“. This shows that pressure from the BDS movement works!

However, the news that G4S hired two apologists for Israeli crimes to write a report absolving it of complicity in “alleged” human rights violations perhaps doesn’t bode all that well for it’s promise to pull out the Israeli prison system.

Therefore we are still urging people to keep up the pressure on G4S, and to continue to send letters to the Minister regarding the Jobpath contract.

The IPSC believes that awarding an Irish state contract to G4S, a company complicit in, and an accessory to, human rights abuses in the Israeli prison regime is something that shouldn’t be allowed to occur. We are therefore asking our members and supporters to please send a letter to the Minister for Social Protection, Joan Burton TD, urging her reject the G4S tender. Below is a sample letter, though personal letters are always better.

You can email the Minister at joan.burton@oir.ie – please be polite and courteous.

It has come to my attention that G4S is leading a consortium to tender for the JobPath contract being offered by your department. As someone who strongly believes in the struggle for human rights in Palestine, we strongly urge you not to award this contract to G4S on the grounds of their complicity with Israel’s occupation and breaches of international law.

Ireland has taken a strong position on human rights in Palestine and Ireland’s commitment to upholding the Geneva Conventions is clearly stated on the Department of Foreign Affairs and Trade website:

Ireland is firmly committed to the effective application and further development of international humanitarian law. Ireland played an active role in the negotiation of the Statute of the International Criminal Court, recognising it as an essential means for bringing to justice those responsible for the most serious international crimes, including grave breaches of the Geneva Conventions and other serious violations of the laws and customs of law (‘war crimes’).

G4S provides security systems for major Israeli prisons, including the Ketziot and Megiddo prisons that hold Palestinian political prisoners from occupied Palestinian territory, inside Israel in contravention of international law. The company has also provided equipment for Ofer prison, located in the occupied West Bank, and for Kishon and Moskobiyyeh detention facilities, at which human rights organisations have documented systematic torture and ill-treatment of Palestinian prisoners[i], including child prisoners[ii]. In February 2013, Jaradat Arafat died following interrogation in a G4S-secured facility[iii].

In addition to these unlawful activities, G4S provides equipment and services to Israeli checkpoints in the occupied West Bank that form part of the route of Israel’s illegal wall, and to the terminals isolating the occupied territory of Gaza. G4S holds contracts for the provision of equipment and services for the West Bank Israeli Police headquarters and to private businesses based in illegal Israeli settlements. The EU has recently issued a directive excluding trade with settlements in the occupied Palestinian territories. A panel of legal experts have concluded that G4S may be criminally liable for its activities in support of Israel’s illegal wall and other violations of international law[iv].

Awareness of G4S’s role in Israel/Palestine and its infringements of international law and the Geneva Convention are increasing[v]. In April 2012, the European Union decided not to renew a security contract with G4S after MEPs and campaign groups raised concerns over the company’s role in “equipping Israeli prisons in which Palestinian political prisoners are held in violation of international law”. The contract was a significant loss for G4S, which had provided security services to the European Parliament buildings since 2008[vi].

The OECD is due to investigate G4S’s supplying of equipment for checkpoints “in contravention of its guidelines for multinational enterprises – a set of Government-backed recommendations for “responsible business conduct” overseas.”[vii] In addition, G4S is being actively opposed by civil society groups around the world for its role in controversial deportation and imprisonment regimes, abuse of workers rights, and violations of universal human rights standards, which have led to the deaths of prisoners in its custody[viii][ix]To award a contract to G4S, would be totally at odds with the principled position that Ireland has taken in relation to human rights in Palestine-Israel and would serve to seriously undermine the integrity of that position.

Yours Sincerely
[Your name]