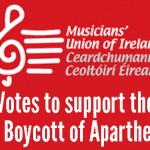 The Ireland Palestine Solidarity Campaign (IPSC) warmly welcomes and commends the Musicians’ Union of Ireland (MUI) for passing a motion in support of the cultural boycott of apartheid Israel. A cultural boycott of Israel has been called for by Palestinian civil society since 2004. The motion was passed on 1st March at the MUI Annual General Meeting in Dublin’s Liberty Hall, and reads as follows:

“The executive of the Musicians’ Union of Ireland urges its members, in view of the repeated and continued disregard by Israel of International Law and Humanitarian Law, to boycott all Cultural Activities funded by the Israeli state and not to accept engagements in Israel except where that event is in support of Equal Rights for Palestinians. We believe such an approach should continue until such time that Israel recognises Equal Rights for Palestinians and observes International Law.”

We congratulate the MUI for passing this motion which demonstrates crucial solidarity with the Palestinian people now living in their 69th year of ethnic cleansing, dispossession and apartheid. This year also marks the 50th anniversary of Israel’s military occupation of East Jerusalem, the West Bank and Gaza.

In 2005 some 170 Palestinian civil society organisations issued a call for Boycott, Divestment and Sanctions (BDS) against the Israeli state “until Israel meets its obligation to recognize the Palestinian people’s inalienable right to self-determination and fully complies with the precepts of international law.”

Since then, the BDS campaign has gone from strength to strength and has much support in Ireland where some 549 cultural workers have signed the IPSC’s ‘Irish Artists’ Pledge to Boycott Israel’ since 2010. Among the signatories are film-makers, novelists, poets, painters, sculptors, dancers, composers, performing musicians and others, including many members of Aosdána.

The IPSC invites members of the Musicians’ Union of Ireland – and all creative and performing artists in Ireland – to sign this pledge, and again welcomes this motion. To support the struggle for freedom, justice and equality for Palestine is to choose to be on the right side of history.