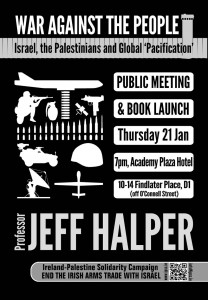 Professor Jeff Halper will be in Dublin to launch his new book, War against the People: Israel, the Palestinians and Global Pacification. The launch will take place on Thursday 21st January 2016 at 7pm in The Academy Plaza Hotel,  10-14 Findlater Place (off O’Connell Street – see location here), Dublin 1. It is hosted by the Ireland-Palestine Solidarity Campaign as part of the End The Irish Arms Trade With Israel campaign.