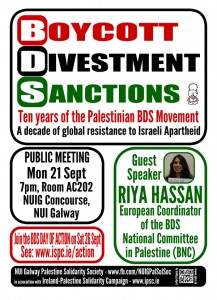 The NUIG Palestine Solidarity Society and the Ireland-Palestine Solidarity Campaign (IPSC) are excited and honoured to host a speaking tour featuring Riya Hassan, the European coordinator of the Boycott, Divestment and Sanctions National Committee in Palestine. The tour marks ten years since the BDS call was issued from Palestine by a huge coalition of civil society, trade union, faith and political organisations.

Ms. Hassan will visit Galway on Monday 21st September at 7pm in Room AC202, NUIG Concourse in the National University of Ireland, Galway.