[Dublin] Exhibition: “You have a gun to shoot children. I have a camera to shoot you.” – The photography of Mohammad Alazza (IPSC) 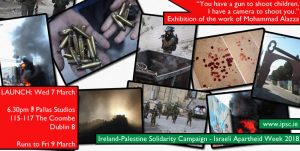 As part of Israeli Apartheid Week 2018, you are invited to an exhibition featuring the photography of Palestinian photojournalist and film-maker Mohammad Alazza in Pallas Studios, 115-117 The Coombe, Dublin 8. The exhibit will be launched by the photographer on Wednesday 7th March at 6.30pm.

The exhibition runs daily between 10am and 6.30pm from Thursday 8th to Saturday 10th March.

This timely exhibition on the 70th anniversary of the Palestinian Nakba (the forced exclusion of 750,000 Palestinians from their land between 1947 and 1949) reminds us of the oppression and continued expulsion of the Palestinian people from their land seventy years on. The artists himself is no stranger to the oppression by the Israeli state. Although an international award-winning photojournalist, Mohammad is refused a permit to work in his own country and in 2013, while photographing an unprovoked Israeli attack on the Aida refugee camp where he lives, he hospitalised after being shot in the face by an Israeli occupation soldier. Before being shot Mohammad called to the Israeli soldier who was telling him to go away: “You have a gun and shoot at children. I have a camera to shoot at you”

This exhibition is a must see for anyone who has the slightest interest in the plight of the Palestinian people or for those who are interested in the use of photography and more generally art as a means of exposing abuses of human rights.

Mohammad Al-Azza is a refugee from the village of Beit Jibreen who was born and lives in Aida Refugee Camp. He is a photographer, film-maker, and director of the Arts & Media Unit of Lajee Center in Aida Refugee Camp, Palestine. In this capacity, he helps youth to produce photography and videoprojects. His first documentary, Ali Wall, won the Global Jury Prize of the It Is Apartheid Film Contest (2010), and his documentary Everyday Nakba (2011) has been screened in numerous festivals. His award-winning photography on media representation, refugee rights, and popular protest has exhibited in Palestine, France, and the United States, among other places.