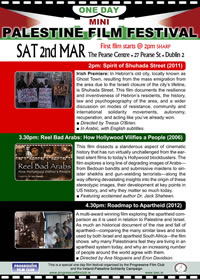 On Saturday 2nd March the Prorgessive film club and the Ireland-Palestine Solidarity Campaign are proud to present a special Palestine Mini-Film Festival in The Pearse Centre (aka The Ireland Institute), 27 Pearse St, Dublin 2. The festival begins at 2pm sharp.

NOTE: Entry to all films is free, and films start sharp.

2pm: Spirit of Shuhada Street (2011)
Irish Premiere: In Hebron’s old city, known by locals as Ghost Town, due to the mass emigration from the area due to the collective punishment closure of their city’s lifeline, is Shuhada Street. This film documents the resilience and inventiveness of Hebron’s residents, the history, law and psychogeography of the area, and a wider discussion on modes of resistance, community and international solidarity movements, autonomy,
recuperation, and acting like you’ve already won.
■ Directed by Treasa O’Brien.
■ In Arabic, with English subtitles.
■ More info: http://vimeo.com/24306777

3.30pm: Reel Bad Arabs: How Hollywood Vilifies a People (2006)
This film dissects a slanderous aspect of cinematic history that has run virtually unchallenged from the earliest silent films to today’s Hollywood blockbusters. The film explores a long line of degrading images of Arabs—from Bedouin bandits and submissive maidens to sinister sheikhs and gun-wielding terrorists—along the way offering devastating insights into the origin of these stereotypic images, their development at key points in US history, and why they matter so much today.
■ Featuring acclaimed author Dr. Jack Shaheen.
■ More info: http://www.reelbadarabs.com

4.30pm: Roadmap to Apartheid (2012)
A multi-award winning film exploring the apartheid comparison as it is used in relation to Palestine and Israel. As much an historical document of the rise and fall of apartheid—comparing the many similar laws and tools used by both Israel and apartheid South Africa—the film shows why many Palestinians feel they are living in an apartheid system today, and why an increasing number of people around the world agree with them.
■ Directed by Ana Nogueira and Eron Davidson.
■ More info: http://roadmaptoapartheid.org/