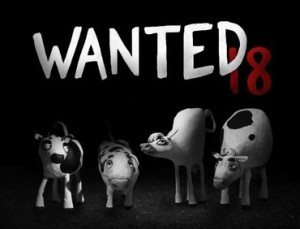 SCREENING IS SOLD OUT

An award-winning Palestinian documentary film, the Wanted 18 is a unique production that combines stop-motion animation, interviews, original drawings and archival footage to bring to life one of the strangest chapters in the history of the Palestine-Israel issue.

During the First Intifada in the 1980s, when Israel seized control of the movement of goods into the heavily-embargoed West Bank, a group of Palestinians from Beit Sahour managed to purchase cows and start a dairy farm to secure their own milk. Israel declared the farm a threat to the state’s national security, forcing the farmers to hide the cows.

“Highlighting the ridiculous without losing track of the seriousness of all acts of resistance, the film should open minds.”
Jay Weissberg, Variety

“The film is funny and serious, it’s one of the greatest films I’ve seen in the past 10 years.”
Intishal Al Timini, Abu Dhabi Film Festival

“Intelligent, funny … but none of the humor and buoyancy detracts from the force of this film.”
Selma Dabbagh, Electronic Intifada

Hosted by PalFest Ireland in association with the Ireland-Palestine Solidarity Campaign.