[Cork] Talk & Exhibit on Palestinian refugees: The Right of Return – From the Nakba to today’s refugee crisis with Lubna Shomali and Nidal Al-Azzah (IPSC) 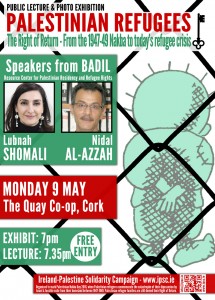 To mark Nakba Day 2016 the Ireland-Palestine Solidarity Campaign is honoured to present Lubna Shomali and Nidal Al-Azzah from BADIL , Resource Center for Palestinian Residency and Refugee Rights. They will speak on Monday 9th May in the Quay Co-op, 24 Sullivan’s Quay, Cork at 7.30pm. There will also be an exhibition of photographs which can be viewed from 7pm.

Organised by the Cork branch of the Ireland-Palestine Solidarity Campaign