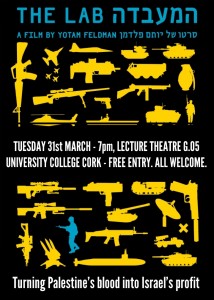 This FREE SCREENING takes place on Tuesday 31st March at 7pm in Lecture Theatre G.O5 (on the ground floor of the Western Gateway Building, on Western Road), University College Cork. The screening will be followed by a discussion with the film’s director, Yotam Feldman who is on a tour of Ireland.

Hosted by the Ireland-Palestine Solidarity Campaign and Academics For Palestine.