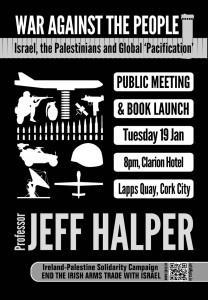 Professor Jeff Halper will be in Cork to launch his new book, War against the People: Israel, the Palestinians and Global Pacification. The launch will take place on Tuesday 19th January 2016 at 8pm in The Clarion Hotel, Lapps Quay, Cork City. It is hosted by the Ireland-Palestine Solidarity Campaign as part of the End The Irish Arms Trade With Israel campaign.