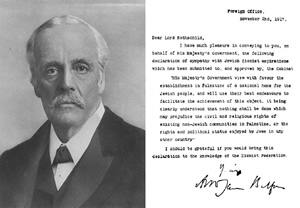 Almost 100 years ago, as British forces pushed into Palestine, politicians in London promised Palestine would become a Jewish National Home.  Penned by Foreign Secretary, Lord Arthur Balfour, the famous Balfour Declaration marks the beginning of the Palestinian people’s betrayal by the international community and by Britain in particular.  To commemorate this seminal event and recall Britain’s ongoing responsibility, this Monday the Ireland Palestine Solidarity Campaign is staging two events.

Between 5-6pm there will be a White Line Picket at the International Wall.  Participants are invited to bring flags, banners and scarves.  And at 7pm there will be an anniversary lecture at St Mary’s University College exploring the reasons for Britain’s betrayal and its continuing legacy today in the lives of Palestinians living under Israeli military occupation.  Speakers are Jan Taylor from the Ecumenical Accompanier Programme for Palestine and Israel (EAPPI) and Richard Irvine from the Ireland Palestine Solidarity Campaign (IPSC).  (Bios below)

The two events are free and open to everyone and follow the IPSC’s music Solidarity Session fundraiser for Gaza Children’s mental health services at the Sunflower Bar this Saturday evening. The IPSC encourages people to come along and both deepen their knowledge of Britain and Israel’s ongoing culpability while displaying their solidarity with the Palestinian people in their struggle for freedom.

Jan lived in the West Bank village of Yanoun on the edge of the Jordan Valley between April & July of this year.   During that time, he was an eye-witness of house demolitions, and violations of International Humanitarian Law.  Living in the community, he was subject to some of the restrictions endured by ordinary people as they try to go about their normal business.  He also had the opportunity to engage with local peace groups as well as international NGOs.

Along with other Irish returned EAs, Jan is now involved in advocacy, using truthful first-hand accounts to both inform people at home about life in West Bank and to advocate for change.

Richard Irvine lectures on the Israel-Palestine Conflict at Queen’s University; he is a co-ordinator of the Palestine Education Initiative and former education officer of the Ireland Palestine Solidarity Campaign.  He has worked voluntarily in the Palestinian refugee camps in Lebanon and participated in olive planting and harvesting in the occupied Palestinian West Bank.