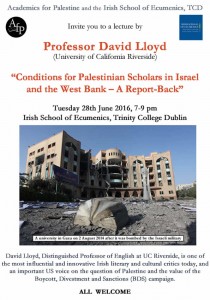 Academics for Palestine in association with the Irish School of Ecumenics, TCD

Invite you to a lecture by

David Lloyd, Distinguished Professor of English at UC Riverside, is one of the most influential and innovative Irish literary and cultural critics today.  His discipline-shaping books include Anomalous States: Irish Writing and the Postcolonial Moment (1993), Culture and the State (1997), and Irish Culture and Colonial Modernity: The Transformation of Oral Space (2011).

David Lloyd’s is one of the most powerful US voices on the question of Palestine and the value of the Boycott, Divestment and Sanctions Campaign.  In 2009 he was a founding member of the US Campaign for the Academic and Cultural Boycott, and campaigned within the Modern Language Association for passing a motion endorsing the 2005 call for boycott by Palestinian civil society organisations which started the boycott movement. He has spoken in the US and Palestine in support of the boycott and his numerous articles on Palestine and Israel include “Settler Colonialism and the State of Exception: The Example of Israel/Palestine”, “It Is Our Belief That Palestine is a Feminist Issue…”  ; and, with Malini Johar Schueller, an essay on the rationale for the academic boycott of Israel in the  Journal of Academic Freedom.