[Dublin] Talk & Exhibit on Palestinian refugees: The Right of Return – From the Nakba to today’s refugee crisis with Lubna Shomali and Nidal Al-Azzah (IPSC) 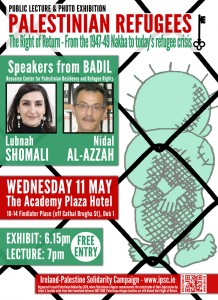 To mark Nakba Day 2016 the Ireland-Palestine Solidarity Campaign is honoured to present Lubna Shomali and Nidal Al-Azzah from BADIL, Resource Center for Palestinian Residency and Refugee Rights. They will speak on Wednesday 11th May in The Academy Plaza Hotel, 10-14 Findlater Place (off Cathal Brugha Street – map here), Dublin 1 at 7pm. There will also be an exhibition of photographs that can be viewed from 6.15pm.