South African civil society and organised labour call on South African officials to show leadership by demanding change to the shamefully discredited “Kimberley Process Certification Scheme” which facilitates trade in diamonds that fund gross human rights violations by rogue regimes, and by securing decent jobs for South Africans in diamond beneficiation. From the 4th to the 7th of June, the city of Kimberley will host a meeting of the “Kimberley Process Certification Scheme”, the diamond regulatory body ostensibly set up to end the trade in diamonds that fund human rights violations – “blood diamonds”. With South Africa currently serving as … Continue reading →

Palestinians call for a boycott of Israeli diamonds

Over 50 Palestinian organisations, representing a cross-section of Palestinian civil society, including women’s groups and trade unions, and international organisations in solidarity with the Palestinian struggle for equality, justice and an end to the Israeli occupation of Palestine, have issued an appeal to women and men of conscience and jewellers worldwide to reject diamonds processed in Israel. Samir Abed-Rabbo, a coordinator of the campaign for a global rejection of Israeli diamonds said: “Revenue from Israel’s diamond industry is a major source of funding for the Israeli military which stands accused of war crimes by the UN Human Rights Council, Amnesty … Continue reading →

Call for fair reporting as Israel attacks journalists in Gaza

Reports from Gaza confirm that 92 people have died in Israeli strikes on Gaza since Israel breached ceasefire brokered by Egypt on Wednesday 14th November. Over 750 others have been injured in the bombardment from air, land and sea. 3 Israelis have died as a result of shelling from Gaza since 14th November. In light of these figures the Ireland-Palestine Solidarity Campaign calls for fair and unbiased reporting of the situation. On the night of Saturday 17th November the Israeli military assault targeted two buildings in Gaza City that housed international and Palestinian media outlets including both local Arab and … Continue reading → 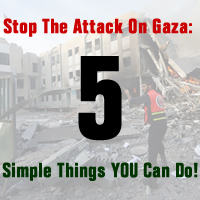 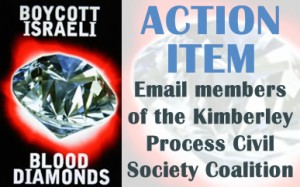 The Kimberley Process (KP) Civil Society Coalition (CSC) members should be made aware that the public want an end to the trade in all blood diamonds – cut and polished diamonds as well as rough diamonds linked to human rights violations. UPDATE: Also, see the end of this page for a similar letter you can send to jewellers to make them aware of public concerns about Israeli blood diamonds. They should be informed that diamonds which fund war crimes and possible crimes against humanity are not conflict-free – they are blood diamonds. A list of civil society organisations and their … Continue reading →

De-Beers, the diamond behemoth, is exploiting the celebration of the Queen’s Diamond Jubilee in a vulgar and insensitive manner in order to promote their diamonds. The company’s decision to display a Forevermark Steinmetz Diamond at the Tower of London ignores the fact that the Steinmetz Diamond Group, through the Steinmetz Foundation, has “adopted” a Unit of the infamous Givati Brigade in the Israel military. The Israeli military stands accused of “serious war crimes and possible crimes against humanity” by the UN Human Rights Council. The Givati Brigade was responsible for the one of the most appalling examples of gross human … Continue reading →

Send a message to your MEP to ask the EU representative at the Kimberley Process meeting in Washington on June 4th to call for a ban on Israeli diamonds that fund war crimes. The sentencing of the blood diamond-funded former Liberian President, Charles Taylor, for war crimes and crimes against humanity will take place on 30th May. Together with a Kimberley Process (KP) meeting in Washington on June 4-7th it is sure to generate a lot more media reports about blood diamonds and so offers an opportunity to push the issue of Israeli blood diamonds into the media spotlight once … Continue reading →

In advance of the upcoming review of the international diamond-regulatory system, the Kimberley Process Certification Scheme (KPCS), a coalition of human rights organisations have called on the KPCS to impose a ban on diamonds crafted in Israel. The groups, which include the Ireland-Palestine Solidarity Campaign state that revenues from these diamonds fund Israeli war crimes and possible crimes against humanity. Below is the statement in full. The Kimberley Process conflict diamond review session must ban diamonds crafted in Israel The Kimberley Process Certification Scheme, under the stewardship of the US chair, Ms. Gillian Milovanovic, is about to be reviewed. We … Continue reading →