SIGN the petition calling on the Kimberly Process to end the global trade in cut and polished blood diamonds – Click Here.

Civil society organisations and leading human rights activists in South Africa this morning issued a statement calling for Israel to be excluded from the international diamond regulatory body – the Kimberley Process Certification Scheme (KPCS), which South Africa chairs in 2013.

Send a Letter to the Kimberly Process Chair
Demand all diamonds that fund gross human rights violations are classed as conflict diamonds and banned – click here.

This important article first appeared on the Electronic Intifada website on 23rd June 2010. It is written by IPSC member Sean Clinton who heads the Boycott Israeli Blood Diamonds campaign in Ireland.

All too aware of how bad association with war crimes is for business, the diamond industry has taken pains to evade questions about its connections with Israel’s human rights abuses — and so far has escaped scrutiny from watchdog organizations.

Representatives for 75 countries affiliated to the United Nations-based Kimberley Process Certification Scheme meeting in Kinshasa this week failed to reach agreement on the export of blood-stained diamonds from Zimbabwe. The elephant in the room was Israel’s burgeoning diamond exports which evade the human rights strictures imposed on Zimbabwe’s diamond exports.

Sean Clinton also had a letter exposing the trade in Israeli blood diamonds printed in Retail Jeweller – the industry magazine for jewellers – which caused an uproar amongst Israeli diamond dealers. As Mr Clinton pointed out, “When six of the most influential leaders of the Israeli diamond industry, representing nine different international bodies, react to a comment in a magazine you know you’ve touched a very raw nerve”. The letter can be read here, and the responses can be read here.

Here also are a number of interesting and relevant articles from the international media regarding Israeli diamonds.

Here is direct to the source data on Israeli trade statistics. 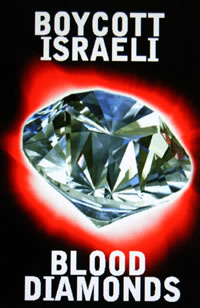 The Ireland-Palestine Solidarity Campaign (IPSC) today – 30th March 2010 – expressed its shock and dismay at revelations unearthed by Limerick-based researcher Seán Clinton in his recent exposé on the role of Israel in the global diamond industry. Mr. Clinton’s article, published last night on the respected Electronic Intifada website, highlights how the industry deceives the public by playing up benefits accruing to poorer countries through the Kimberly Process – the stated aim of which is to eliminate ‘blood diamonds’ – while simultaneously hiding the fact that Israel, a state that has militarily occupied Palestine for more than 40 years, is the world’s biggest beneficiary of the diamond industry.

What Mr. Clinton’s article reveals is the hypocrisy and doublespeak that lie at the heart of the Kimberly Process, which claims to be “a tracking system for the export and import of rough diamonds to prevent the exploitation of diamonds for illicit purposes such as war and inhumane acts”. Yet the Process only applies to “rough diamonds used by rebel movements or their allies to finance conflict aimed at undermining legitimate governments”. This narrow definition of what constitutes a ‘conflict diamond’ lets states, such as Israel, that export polished diamonds and regularly commit war crimes completely off the hook and gives an utterly false impression to consumers that all Kimberly Process certified diamonds are ‘bloodless’. The article also reveals complicity with Israeli Apartheid at the highest levels of the World Diamond Council, as Israel currently chairs the Kimberly Process, while diamonds account for over 30% of Israel’s total manufacturing exports – worth nearly $20 billion in 2008.

The Ireland-Palestine Solidarity Campaign calls on the Irish government to support a call for the same human rights standards to be applied to all diamonds and for the Kimberly Process to be reviewed as a matter of urgency and also calls on Irish jewellers to refuse to trade in Israeli diamonds and to give consumers the right to know where each diamond was crafted and the right to choose Israel-free diamonds.

IPSC Spokesperson Freda Hughes speaking about the article today said, “It is unacceptable that the World Diamond Council should allow this situation to pertain whereby Israel can fund its illegal occupation of Palestine and its war crimes in Gaza through its diamond industry when there is a process in place to prevent diamonds being used in such a way. We call on our government to insist that the same human rights standards to be applied to all diamonds, both rough and polished.”

Ms. Hughes continued, “Most people are unaware that Israel is one of the world’s leading producers of cut and polished diamonds and, as diamonds are normally not hallmarked, consumers cannot distinguish an Israeli diamond from one crafted elsewhere. It is so important for consumers to become aware that the ongoing slow and deliberate ethnic cleansing of Palestine including the massacre of over 1,400 people in Gaza by Israeli forces last year and its use of illegal weapons such as white phosphorus and flechettes is directly funded by the Israeli diamond industry. To ensure that Irish consumers are given the freedom to choose not to become complicit in this process we are asking Irish jewellers to refuse to trade in Israeli diamonds.”

Ms. Hughes concluded by saying, “The IPSC fully backs Mr. Clinton’s research into the Israeli diamond industry and intends to link up with other Palestine solidarity movements and Boycott Divestment and Sanctions (BDS) networks in order to further the campaign to boycott Israeli blood diamonds.”

The World Diamond Council was established in 2000 with its mandate being “the development, implementation and oversight of a tracking system for the export and import of rough diamonds to prevent the exploitation of diamonds for illicit purposes such as war and inhumane acts”. To this end it initiated the Kimberly Process Certification Scheme to stem the flow of “conflict” or “blood diamonds”. In keeping with the limited concerns of the WDC the UN-mandated Kimberly Process adopted a very narrow definition of what constitutes a conflict or blood diamond: “rough diamonds used by rebel movements or their allies to finance conflict aimed at undermining legitimate governments”. Such a limited definition of conflict diamonds allows the trade in cut and polished diamonds to avoid the human rights compliance demanded of rough diamonds. Therefore Israel, in constant and flagrant breach of the human right of the Palestinian people as well as international law, is able to benefit from the unrestricted access of diamonds crafted in Israel to the multi-billion dollar global diamond market. On its website the World Diamond Council fails to mention that the diamond industry is the main artery of the Israeli economy, accounting for over 30% of Israel’s total manufacturing exports worth nearly $20 billion in 2008.

An Israeli Blood Diamond is forever…on your conscience

Israel is the world’s No.1 exporter of cut and polished diamonds. Israeli gemstone exports were valued at over €16.7 billion US dollars in 2006 and are expected to approximate $20 billion in 2007. In the same year Israeli arms sales were valued at $4.2 billion and total agricultural exports amounted to just over 1 billion dollars. The significance of the diamond industry to the Israeli economy can best be appreciated when one considers that the budget of the Israeli Ministry of Defence in 2008 was $13 billion.

Most people are unaware that the majority of diamonds on display in Jewellers’ windows are likely to have been manufactured in apartheid Israel and that their purchase helps to fund Israel’s illegal occupation and Zionist crimes against humanity. Israeli diamonds are de facto Blood Diamonds.

Significant revenues from corporation and personal taxes accrue to the Israeli state form the diamond industry each year. This helps to fund the 60 year long illegal occupation of Palestinian territory and associated crimes including murder, ethnic cleansing, home demolitions, destruction and theft of land and collective punishment of the Palestinian people. 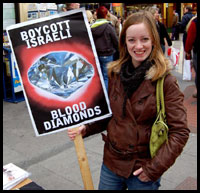 The UN-based Kimberley Process which seeks to eliminate the trade in diamonds from conflict zones only applies to uncut or rough diamonds. It does not control to trade in polished diamonds from conflict zones. This has allowed jewellers to continue selling Israeli diamonds, conveniently ignoring the war crimes and crimes against humanity being committed by Israel, the world’s No1 producer of cut and polished diamonds.

Consumers and jewellers presently have no way of distinguishing which diamonds are cut and polished in Israeli and which are crafted in countries that respect human rights and international law. Consumers have a right to know not only where the diamond was mined (as certified by the Kimberley Process) but also the country where it was cut and polished.

Diamonds can be microscopically laser inscribed to identify where they were crafted. A number of manufacturers already employ this technology to brand their diamonds making them readily distinguishable. Some Canadian manufacturers inscribe a maple leaf on their diamonds.

Israel’s appalling record of crimes against humanity, breaches of international law and disregard for the norms of civilised behaviour provides ample justification for an international campaign to isolate the Israeli diamond business. Consumers should be given the information necessary to make a fully informed decision when they purchase diamonds. People may be unwittingly supporting the apartheid regime in Israel if the purchase gemstones with out knowing where they were crafted.

The Ireland-Palestine Solidarity Campaign is calling for the introduction of a hallmark system for all diamonds which will inform consumers where they were manufactured, giving them the right to choose Israel-free diamonds. Consumers should have the right to know that when they purchase gemstones they are not funding the murder and oppression of innocent men, women and children in Palestine or elsewhere.