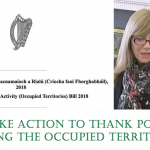 We received some absolutely huge news this week as Fianna Fail announced its intention to support Sen. Frances Black’s bill to ban trade with Israel’s illegal settlements in Palestine. This shift of position is a result of the lobbying carried out by all of you – a real victory for people power! – so we would like to sincerely thank you.

With Fianna Fail’s support, this bill will pass in the Seanad, moving on to the committee stage – this will be an historic first step in outlawing the profiteering from the proceeds of illegally colonised land.

Those who have pledged to support the bill will now come under huge pressure from the Israel lobby machine – so it’s hugely important that we take the time to thank them for their principled stance in favour of international law. They need to know that the Irish public support their decision!

So, this is very important, we ask you to take a few minutes to thank Senators and TDs from Fianna Fail, Sinn Féin, Labour, Solidarity, People Before Profit, Green Party, Social Democrats and Independents who  have pledged to support the bill.

Things you should mention are: to thank them (make this clear in the subject header) for their brave and principled stance, let them know that they have your support in this matter, and that you hope they will hold strong in the face of pressure and continue to do the right thing for the Palestinian people and for Ireland’s reputation as a country that takes international law and social justice seriously.

You can find a list of copy and pastable email addresses of supportive politicians here.

You may also wish to email Fine Gael TDs and Senators to let them know that you are disappointed with their continued opposition to this bill, and that their argument that the bill would contravene EU law simply doesn’t stand up to scrutiny, especially in light of the views of the multiple legal opinions sought by Sen. Frances Black.

You can find a list of copy and pastable email addresses of Fine Gael politicians here.

Recent events show that the passage of this bill is more important than ever. Just yesterday Israel began ethnically cleansing the Palestinian villages of Abu Nuwar and Khan al-Ahmar and attacking their residents, something which the Irish Minister for Foreign Affairs Simon Coveney has himself condemned, noting that “the eviction of families and demolition of their homes is an action which has a strong historical resonance in Ireland”. At the same time, illegal Israeli settlers invaded lands near Al Khader and cut down over 350 grapevines. Meanwhile, the Israeli President has stated that “Gaza will not be rehabilitated”, making it clear that the people of Gaza will remain under a brutal and illegal siege – and continue to be shot down as they protest for their rights.

For these crimes against the Palestinian people to stop, Israel’s international impunity must end. With this bill Ireland will show that there is a price to pay for the illegal colonisation of occupied lands.